Just a few photos to show how things have progressed on the magazine build of the ICM 1/24th scale Mercedes Benz G4. 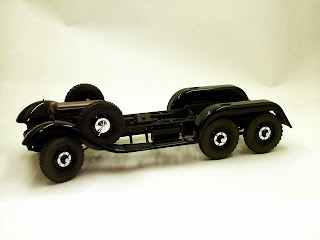 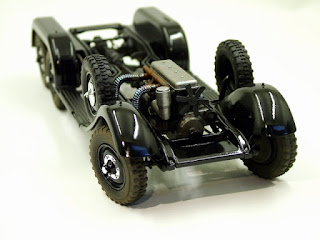 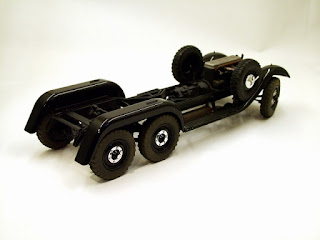 This is a kit that I have started to build whilst at work when I am sitting loading bays waiting to be loaded or tipped. I picked this up at IPMS(UK) Nationals in 2011 for a very good price, especially a kit that includes the engines as a bonus extra. Being my usual self, I started the build by not following the instructions (just have to live dangerously!) and decided to tackle the engines first. These are fairly detailed for their size and the general construction is not too bad. The instructions are not clear how some of the pipework on the engine is routed, this was a bit frustrating and it was only through perseverance that I worked out where they all went. I also built up the undercarriage bays with the engine mounts to help with the process of working out the position of the large hose which ran along the side of the block. The instruction diagrams did not show clearly where this hose sat and where it went to, but as the radiator was mounted to the engine, the path of this hose became clear. The engines have been left unattached from the mounts to make it easier for painting and weathering of them and the engine bays. 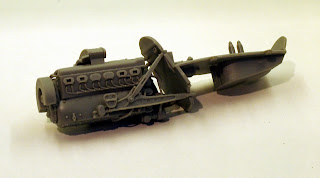 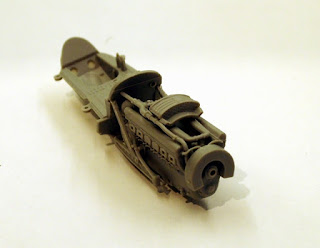 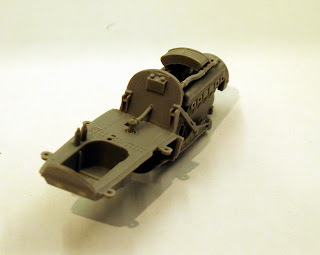 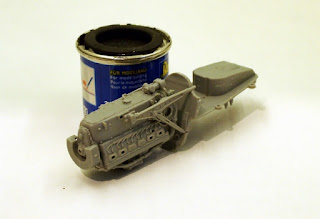 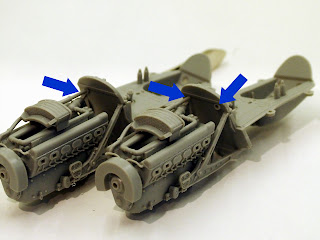 Below are the two bulkheads and the positions of the location holes for the hoses from the engines. The one on the left is correct and the one on the right needs to be altered. 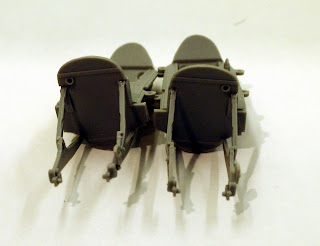 Now that the engines have been done, it was time to start on the cockpit interior. Dragon have produced a very nicely detailed engine for this kit, and the detail continues with the cockpit interior. The below photos are of what had been done so far, there is a lot more assembly to do on this interior before it is completed. I am first assembly the main structure of which is to be painted in the same colour. All of the other items like the machine guns, ammo packs, dashboard and other various parts, will be painted before adding to the rest of the interior. There is also some etched seatbelts that will need to be painted before adding to the seats. 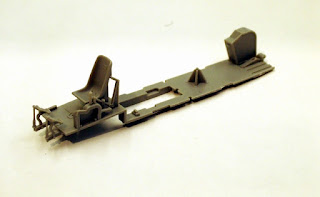 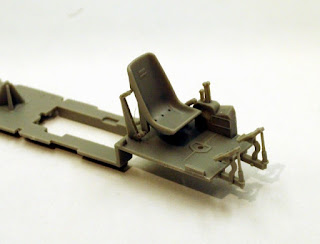 My opinion so far of this kit is that it is very nice, except for the little hiccups with the engine instructions and wrong positioning of the hose for one of the engines. Otherwise, this is a very detailed kit and I hope I can do it justice with the finished model. We will have to wait and see! But continuing with the Messerschmitt Bf110 theme, I also have one of Eduards kits of this aircraft in my stockpile. That one is a Profipack Bf110E (8203) version, which comes with a little resin Dachshund dog in the box. It would be good to compare these two kits and finished models at a later date. So, an update on this project will follow soon.

Posted by The Mechanic AKA. Mick Lomax at 18:59 No comments:

Last Sunday was the MAFVA Nationals which were held at IWM Duxford. My grandson Kyran, had some spending money and spent the day wanting to buy things that were basically rubbish. Each time we were at a stand, he was not interested in buying a kit, until he saw this! 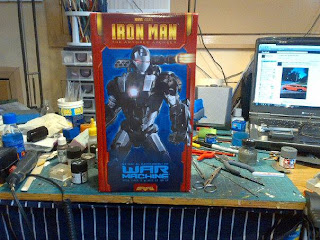 He wanted this model of one of the Iron Man figures from Morbius Models and I gave him the extra cash to get it. My original plan was for him to build it, but this went straight out of the window once we looked at the instructions, plus it is for age 15 and up, he is only 9. So another of Kyran's kits he buys for granddad to build! How does he manage it every time? And a figure being my first! 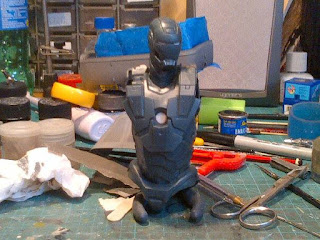 Well, today I got started on it whilst I was sitting getting loaded at work. It definitely is not a kit for a 9 year old to build, but a 12 year old who has had some modelling experience will be able to build this model, the harder bit will be the painting of it. So far, the figure has gone together without any problems as of yet. There are minimal mould-lines on the parts and most of the joint lines are hidden by another body panel. The only joint lines I have needed to clean up have been on the head area and one on the front upper torso. The outer body armour panels seen in the above photo are only held in place with some Blutac at the minute, but once they have been glued in position, a few small joint lines will need to be cleaned up.

To get to this stage, it has been about a hour and a half of work. So I think if you wanted to, it can be built in a day and then another couple of days for painting. This has got my taste buds tempted to get some more in the series of figures!

I will keep you all posted on this figures progress.

Posted by The Mechanic AKA. Mick Lomax at 20:36 No comments:

Hi All out there in Bloggerland.

Well, thanks to work causing me to have a several late finishes over the last couple of weeks, progress on the Mercedes Benz G4 has been a little slower then I planned. But it is getting there!

So far, the chassis has been built and painted, just sprayed some gloss clear on the fenders tonight and some heat staining on the exhaust. The engine is done and will be fitted to the chassis once the clear has been given a couple of days to harden up. Building wise, I must have about 80% of it done now, it is mainly the smaller detailing bits left to do once the painting is done. The body needs the interior floor painted before the exterior can be sprayed and cleared. I have chose to go with the gloss black finish in the options, it's more impressive I think and would be a higher ranking officers car to. So far a few little niggles with the kit, these will be addressed in the magazine review once the model is finished. I will post a couple of photos of the completed model here when it is done.

Now onto what else I am doing. I realised that the 53 Chevy was going to be a little awkward to work on in the lorry cab each day, so first I was taking the Hasegawa 1/32nd scale FW190 with me to work, but this did not get started on. So on Sunday evening, I decide to change it for another kit to take to work with me. After having a rummage through my stockpile, I dug out a Dragon 1/48th scale Messerschmitt Bf110D-1/R1. 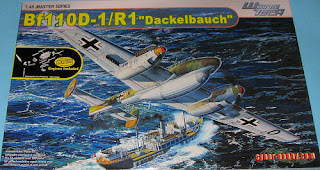 A very nicely detailed kit that includes the engines and some etch. So far, I have only had a couple of short sessions on it at work so far, decided to start on the engines first and not follow the instruction sheet sequence of building. Still working on the first engine and I have had a few swearing outbursts because the instruction sheet for the engines does not clearly show where some parts are routed around the engine block. Once a bit more progress has been done on the Bf110, I will take some photos and start the WIP postings on here.

So happy modelling to you and catch you soon.

I will be at the IWM Duxford this Sunday for the MAFVA Nationals on the club stand. Pop along and say hello if you are there.

Posted by The Mechanic AKA. Mick Lomax at 20:52 No comments:

Hitler Gets Some Bad News!

Bet you didn't know Hitler was a modelmaker himself?

This is the moment when he was told that Testors were stopping the manufacture of some of their paintlines. As you can guess, he was not happy!


Posted by The Mechanic AKA. Mick Lomax at 12:20 No comments:

The Mechanic AKA. Mick Lomax
Hemsworth, West Yorkshire, United Kingdom
Model building is a way for me to get away from the hassle of work and everyday life. In my workshop, I'm in my own little world of "Plastictopia" where I can create my little masterpieces. I started building automotive models when I first got back into the hobby, then progressed back to aircraft and armour thanks to the club after I joined it. Result, a large stockpile of un-built kits to choose my next project from and a selection of ongoing projects in various stages of build. The wife says I spend too much time in here. My grandson likes it in here. I like it in here. Two against one, the men win.... IPMS(UK) member & former Milton Keynes Scale Model Club member. Check out my website, "Mick's Modelling Site"