I do not know if it is the same with other people out there, but November always seems to be a busy month for me. It is filled with several family birthdays, including my own plus our wedding anniversary. I also have the IPMS(UK) Nationals in Telford falling on the second weekend. But in addition to all of this, I am in the middle of refitting the bathroom to, so work on the Honda has been a little slow.

So a run down on the progress since the first post at the beginning of the month.

Construction continued with assembling the fuel tank, front mudguard, forks and rear suspension. Re-chroming of the plated parts has continued over two more sessions, with the final parts being done last week.The first photos below are of the bike with the main components assembled to the frame after they had been painted. The mudguard, fuek tank and rear panel are in primer state waiting for me to decide which colour I was going to paint them. At this point I was still thinking about painting the model in the stock red that Honda used on this bike back in the day. 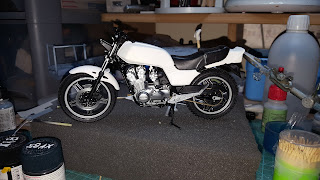 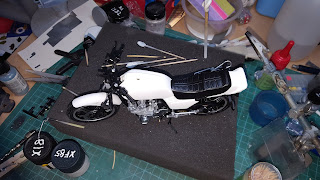 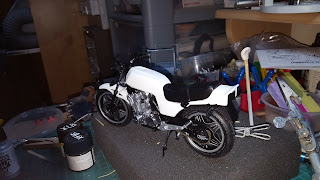 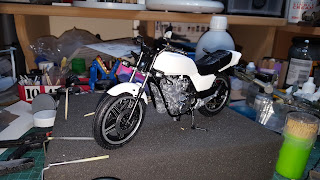 After a few days of changing my mind several times on the paint for this project, I decided to try out the Alclad candy paints that I have in the draw. This consists of a silver base coat, with Alclad say you can spray direct onto bare plastic. After leaving it to cure, you then build up the candy colour in several coats until you get the shade you require. The images below are just the candy coat, there has not been any clear coats added to the parts yet. For this model I used the Ruby Red Candy, mainly to give the bike a more modern feel to it. 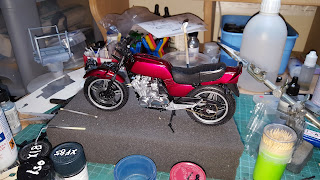 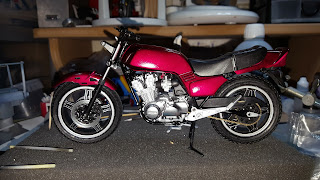 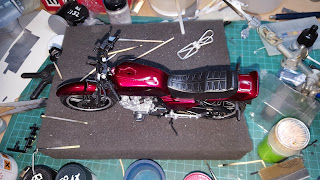 Now that I was happy with the colour of the model, it was time to choose which decals to use on the bike. I wanted to keep with the original decals which came with the kit, but which colour stripes was I to use? After some chatting with some fellow modellers and to their agreement, I went with the black and silver stripes that Honda used on the black finished bike. Everyone has said it was the right choice out of the three stripe colours available. 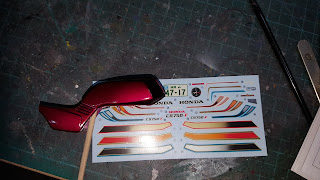 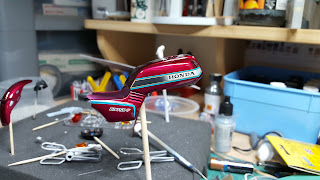 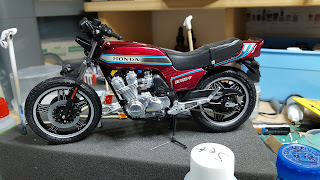 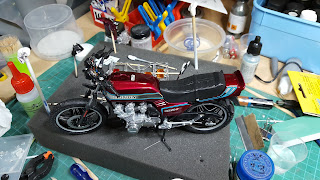 Now to bring everything up to today. The lights, instrument cluster and vinyl hoses have all been added to the model. There is still some detail painting to be done on the fuel tank and rear panel before gluing them in place. The front mudguard had a little accident when something got spilt onto it and reacted with the clear coat. So this has to be re-sprayed, but also sort out the bad fitting of it when the front wheel is in position on the forks. So I need to see what has to be altered to make the fit better. Otherwise, work can continue on the rest of the model with the fitting of the exhaust system and other remaining parts to finish the main construction off. 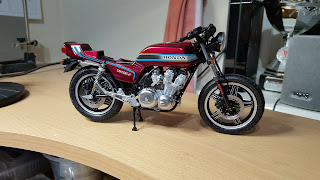 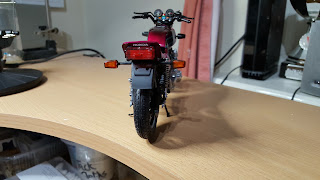 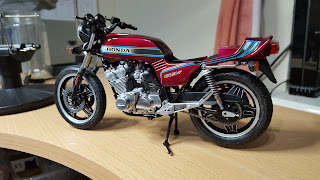 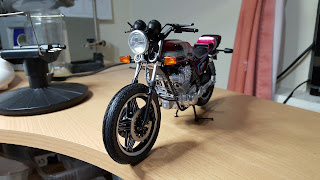 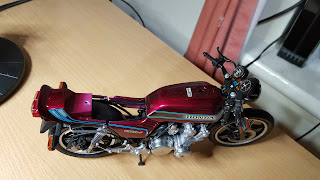 Before I finish off this post. When I fitted the decals for the dial faces, instead of putting them direct onto the face of the cluster, I stuck them onto some clear acetate sheet. There was two reasons for this. First, the faces on the cluster had ejection pin marks on them, the second was to give the effect of the plastic glass covering the dials. A simple little job to give a better look to the finished model. 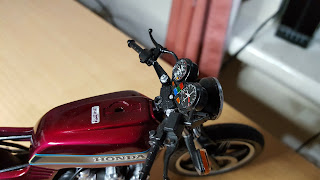 So, that is all for now. I will update you on this project soon now that the major work in the bathroom is done. That like the Honda project is down to cosmetic work mainly. So until next time.
Posted by The Mechanic AKA. Mick Lomax at 20:11 No comments:

Whilst the bathroom refit is taking priority at the moment, I still needed something to fill the time when it is too late to do anything on the bathroom in the evenings. So I decided to have a change from the normal projects and dug out this Tamiya 1/12th scale Honda CB750-F kit. This also happened to be a motorbike that a couple of my old friends from back in the early 80's use to ride, so it was a little nostalgia trip for me to.
The first job for me was to strip all of the kits chrome plating off it plastic. I will replace it will Alclad, just like I did on my Harley Davidson Heritage Soft-tail model I did about ten years ago. But at least the Honda does not have as much chrome as the Harley did. The other main advantage to doing this is being able to assemble the two exhaust silencers together before painting the Alclad. Hence remove the joint lines visible if I had used the kits plating instead. 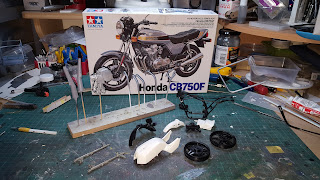 Below are the first batch of parts to be redone with the Alclad. These consist of the whole exhaust system and various parts of the engine which happen to be chromed. My usual technique is followed, starting with the primer, then gloss black base, then the honey clear followed by the chrome paint after which was protected by the Alclad gloss clear
. 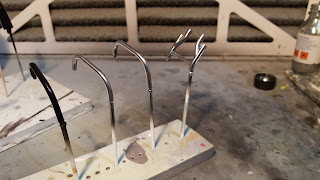 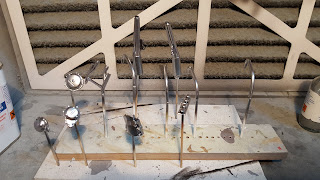 The assembled engine was painted with Alclad aluminium before adding the chromed panels and covers. here it is seen test fitted in the frame along with the forks and mudguard, rear mudguard and part of the seat assembly. 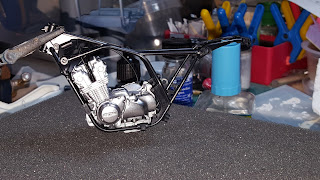 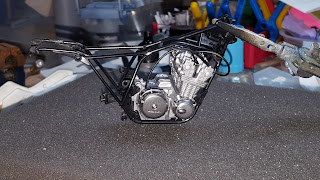 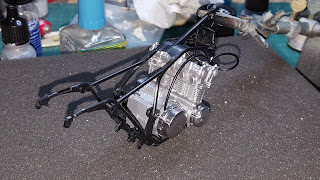 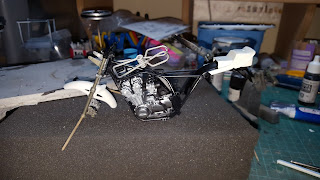 Jump to tonight and to where the project is now. The frame halves are now painted along with the rear swing arms, wheels, rear mudguard and the rear exhaust/footrest brackets. The forks and all three disc brakes have been re-chromed and are curing as this is being typed. They just need some detail painting to be done before being assembled for fitting to the frame. The completed engine has now been secured inside the frame halves and is waiting for the forks and rear swing arm to be added once they are finished. The next batch of parts are sitting ready to be re-chromed, they will be started on in the next couple of days. But as for this weekend, I will finishing the tiling in the bathroom and start painting the woodwork as the following weekend I will be off to the IPMS(UK) Nationals at Telford for three days. So that it for this installment. 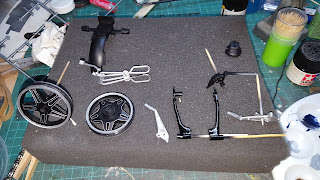 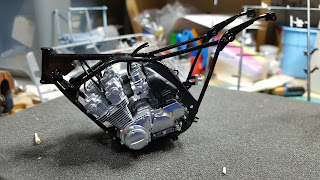 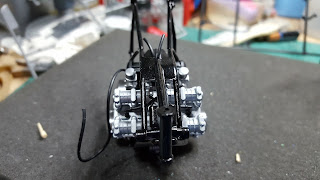 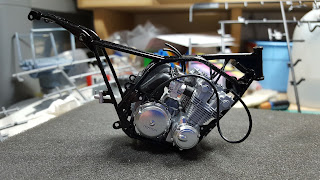 Posted by The Mechanic AKA. Mick Lomax at 20:26 No comments:

The Mechanic AKA. Mick Lomax
Hemsworth, West Yorkshire, United Kingdom
Model building is a way for me to get away from the hassle of work and everyday life. In my workshop, I'm in my own little world of "Plastictopia" where I can create my little masterpieces. I started building automotive models when I first got back into the hobby, then progressed back to aircraft and armour thanks to the club after I joined it. Result, a large stockpile of un-built kits to choose my next project from and a selection of ongoing projects in various stages of build. The wife says I spend too much time in here. My grandson likes it in here. I like it in here. Two against one, the men win.... IPMS(UK) member & former Milton Keynes Scale Model Club member. Check out my website, "Mick's Modelling Site"